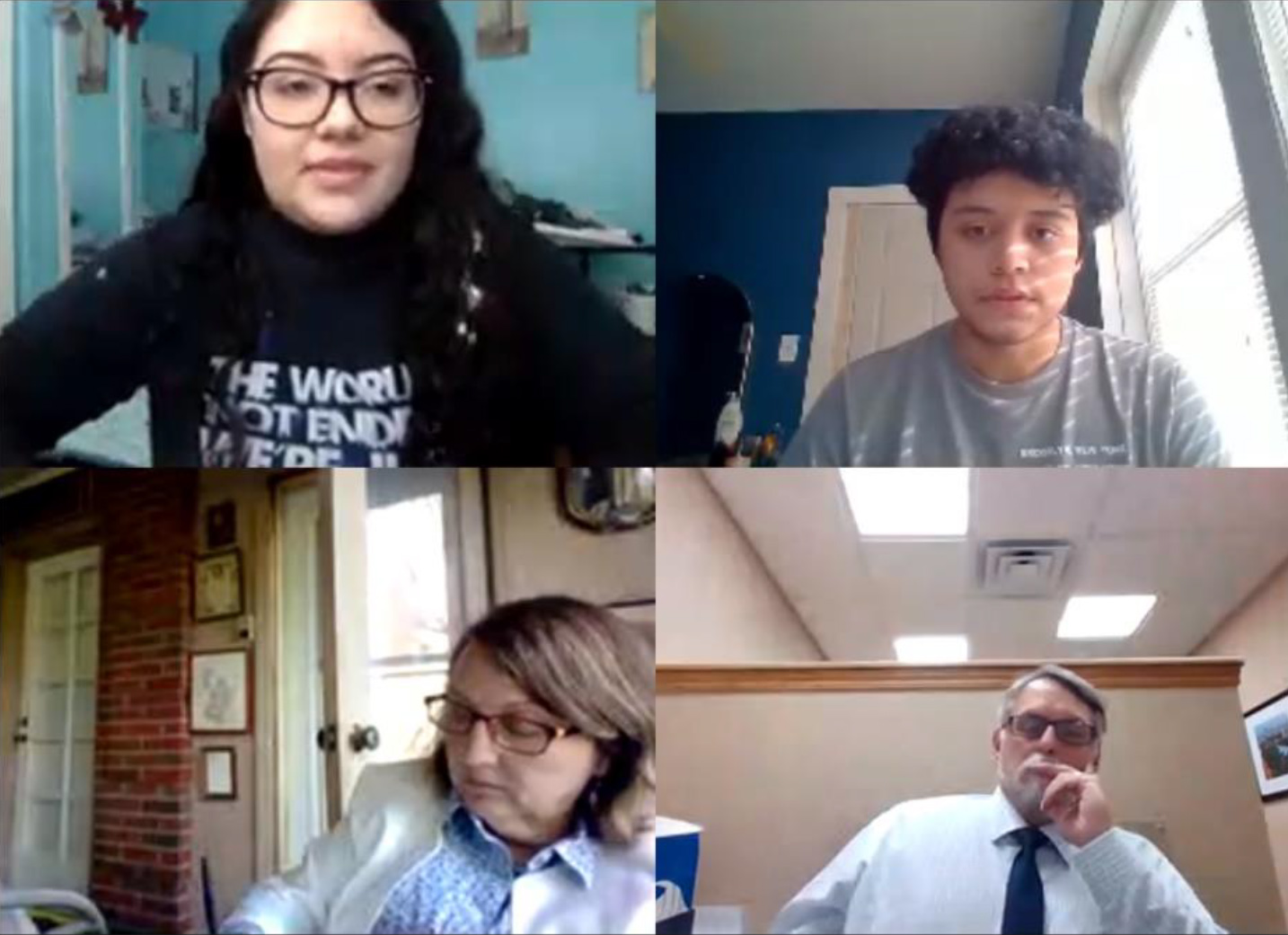 “This is not the trial we imagined, but the success of this event is indicative of all the work you’ve done,” Beth LaBarge told her students at the conclusion of the Mock Trial club’s final meeting. Speaking from her home to a virtual audience of students, faculty, staff, and volunteers, Ms. LaBarge was close to tears as she wrapped up a unique Mock Trial season amidst the global pandemic.

The Cristo Rey Mock Trial club provides students an opportunity to learn about the legal profession as they prepare a case to be argued against other high school teams at the annual Howlett Cup Tournament at the Daley Center. Students from ten Catholic high schools in the Chicago area compete in front of real sitting judges as their prosecution and defense squads face off to determine the case winner and to crown the best attorney and witness portrayals.

Each winter, Ms. LaBarge and her volunteer coaches assemble a team of students, many of whom are interested in careers in the law and public service. The volunteer coaches are what make the team’s success possible. Over the past four years, the coaching team has been made up of five dedicated volunteers, including alumni Adrian Gonzalez (‘07) and George Escareño ('02) - the first Cristo Rey alum to become an attorney. The other coaches - Bill Luby, Anne Marie Brunner, and Rich Vavra - are practicing attorneys who relish the chance to teach the next generation about their profession.

Typically, a season involves three months of preparation, including multiple weekly meetings, Saturday practices, and outside assignments. Students work with coaches to write their opening and closing statements, memorize case facts, practice public speaking, and for the witnesses, take on a whole new persona. On March 13, just a month into the season the statewide school closure order seemingly sealed the fate of the tournament.

Cristo Rey teachers transformed their entire curriculum to an online format in just three days after the school closure was announced. Overwhelmed by the learning curve of online learning, new duties and stresses at home, and disproportionate impact of the coronavirus on their neighborhoods, many students wrote off extracurricular activities until next year, to focus on schoolwork. But not this group.

Despite the Howlett Cup cancellation and the challenges of online learning, the students and coaches decided to continue on their own. With a team comprised of nine veteran seniors and six freshmen, it was important that the underclassmen learned from seasoned teammates who had been part of a trial before, and would soon leave for college. “The fact that the seniors wanted to help the freshmen to make the team better in the future has been phenomenal and impressive,” noted coach Anne Marie. She went on to tell the students that it was evident that the “esprit de corps” was alive in each of them.

For the next eight weeks, the team met virtually, utilizing Microsoft Teams as a collaboration and meeting platform. Students and coaches exchanged emails, chats, and held video calls to go over materials, practice trial elements, and learn what to expect for the highly anticipated intra-squad trial. While coaches provided legal knowledge, it was the mentorship of the senior teammates that was irreplaceable.

At the final trial, students, coaches, and spectators tuned in to the call from bedrooms, laundry rooms, backyards, and couches to deliver opening statements, then cross-examination, from the attorneys and witnesses. Despite the physical distance, the trial ran smoothly, with speakers appearing on video, ready to play their role. Off-camera, team members called objections, and coach Adrian served as a judge to keep things moving.

After the trial wrapped up and coaches and students gave feedback to participants and team members had said goodbye until next year, the seniors were asked to stay on the call for a final announcement. Coaches Anne Marie and Rich had a surprise in store for the nine seniors they had worked with since joining the team as freshmen. Rich led: “When you’re older, you’ll see others that need something and you’ll pay it forward. We’re doing this because we think you’re terrific; you’ve got a rough road ahead, hope this makes it easier,” as he and Anne Marie announced that each of them would receive a scholarship for their upcoming college experience.

Putting aside their disappointment at the loss of many senior milestones, each student did what they could to ensure an excellent Mock Trial season, and to leave a strong legacy behind. The graduating Mock Trial seniors, with the help of their newly awarded scholarships, plan to attend the University of Illinois- Urbana Champaign, Arrupe College of Loyola, St. John’s University, University of Dayton, Blackburn University, and National Louis University.

“You took time every day to help us,” senior Fernando told the coaches and moderators at the end of the call, “Thank you for your time, dedication, and for always supporting us.”